So, my new muses Hawkhaus blew through town from Detroit and we had a wicked time collaborating together Saturday at The Hotel Germain. There will be future stuff too. You’ll see. I see the landscape of my future and it is dotted with a LOT TO DO. Muchos overwhelming. All good things though. If not now when right?

I started making art again. Part of it feels like a dare but commission requests have started coming in so there you go.

The Reclamation Project from hawkhaus on Vimeo.

We are going to make video magic also.

Lizzy and Reggie are also in a band called Konqistador which is a big deal or something but I don’t pay attention to stuff like that. I’ve dated fat cats and been extemely oblivious to their level of fame. Blows their minds wish you could see it.

L told me R read The Satanic Bible and it helped him. A fan put this on stage at one of their gigs. I am trying to think of something I gave them other than a headache. Ha.

Lizzy gave me one of her bodysuits for the road. Sweetheart.

I was Willow Smithing here.

It’s about time I did some of this. Coupled by that. Thanks guys! 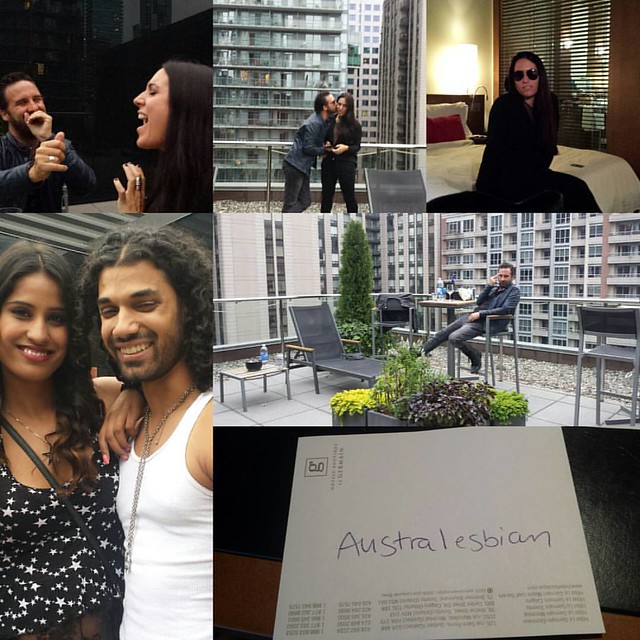 Took a ton of pictures yesterday as well. More to come when I have time.

If you are attention starved ride a bike in a bodysuit like this. Take your pants off down by the water too. Go for it!

The food was mighty tasty at School. We were misbehaved students a little.

It was a fabulous fun-filled time and anybody witnessing it from a neighbouring balcony was a lucky guy. I liked underwear party that I saw at one point over yonder of a guy and a girl totally ignoring us right back. Go Saturdaze.