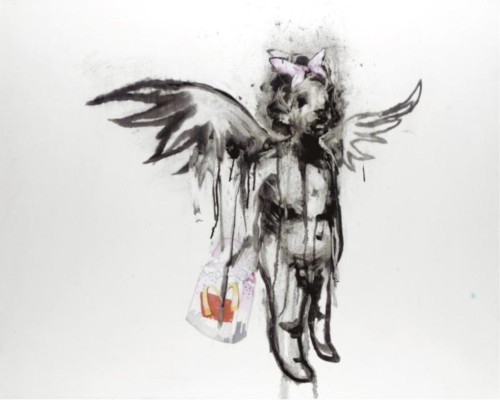 that’s my new saying but i can’t decide how i want to say it yet though, i guess it depends on how funny i am feeling and the circumstance of the situation at hand. i will keep you posted.

how was your nite?

matt gave us a jug of vodka for christmas and i gave him a painting i’m sick of that he’s been after for awhile.

my resolutions are to drink less, get more tanned, swear less, slur less, and feed more squirrels. oh and be more professional and write better/more and be less of a dick more of a prick. i think i can do this.

‘scuse us white people dancing, much like deer crossing ‘cept way less graceful but with just as much DANGER possibility. we tend to point a lot, and kick, and sway and fall into plants and sharp objects and shove and close our eyes while doing this.

i blew mine off before midnight and justified it by the fact that i would be BUSY taking everyone’s picture at the stroke (ew)(haha)(no ew) of midnight.

all i see is a floating drink she is completely camouflaged and this is so vegas-looking i love it who wants to go on a gamble adventure with me?

OOOOooooh someone went all out. what i meant it! did YOU bring a disco light?

ugh that one picture ruining fallen-out curl strand in my face!

an insecure moment in time captured immediately after, i do not know how to work “curlishy” hair or my face OR MY LIFE.

we call this the fleet…

i see someone i recognize.

steph skanked someone when rancid came on, as in kicked a girl or stomped on her foot. AHAHAHAh ah aw. then we dissected her (skanked chick) reaction with Madeleine until it turned out that steph was actually the victim.

native necklace representin’ and i am enjoying that non-chalant pose in the background, pretty slick.

TAKE MY PICTURE SO I CAN SEE WHAT I LOOK LIKE WITH THIS FEATHER MASK ON MY HEAD LIKE IT’S NOT A BIG DEAL.

my premature celebration. i tried to pop it over these guy’s heads (and i did) as they were posing for a picture and it was almost timed perfectly for them oh what a nice picture that would have made.

NICE RING. oh yeah at one point i was sitting in this high chair (a bar chair, retard) and steph was dancing around me so i asked if it felt like she was dancing with someone in a wheelchair and she said yes it did then before we were even finished laughing at our own comedy we both out of breath recounted the story for other people. if you’ve never met me before that is pretty much the only thing you’re missing out on, i say something and if i think it’s funny, i then say what i said to someone else and then to someone else until i run out of people.

i was doing a little dance for fil, he had already removed the top from his popper so it would blast better come midnite, i got self conscious, asked if i should stop my mating dance and as he gestured with his hand to keep going, which was holding the popper, it spooged all over his stomach. slowly too. EWWW ha.

he had two green line stains on his forehead when we got home.

white people dancing on that shit was extra dangerous especially with sloshed beer all over it.