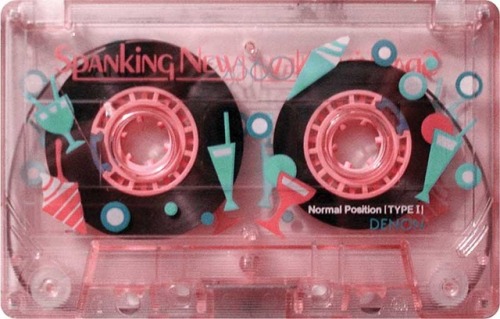 yesterday afternoon sass and i spent two hours at vintage buy the pound (the new bloor location) and they have a blog too! fil waited in the car (playing sudoku on his blackberry and emailing whatever etc he forgot his book AND he did me this solid cos he knew it would make me less crabby for the shit show event what was going to be last nite which i will tell you about later) while we manically tried on and altered dresses – i came out with 6 dresses, a cardi and an insane psychedelic mushroom print smock type thing that if i walked into the room wearing it you would have an instant panic attack if you were baked out of your gourd. anyway, it was fun as hell and if you see something you absolutely NEED but it doesn’t fit right they will alter it on the spot for you, or you can do it yourself on one of the many sewing machines available. they also host sewing and crochet classes and on feb 7 there’s going to be a rock show down in there too, some band on sonic youth’s label not sure exactly whom and there will be booze (shh shh) i suggested to irene (resident sewing and alterations whiz all-around awesome person) to have a couple tables/baskets of clothes on deck so people can drunk shop (they plan to move everything to the back out of the way in case some sticky fingers turn up). actually when we first arrived i asked if i could take photos and gave irene my card she KNEW me from the vice letter i wrote back when i was 18 and was floored by that story i was like well at least someone is – so fucking tired of the toronto hate pool, change already. after that it was a slew of you look great in that compliments which is why 60 bones + later i am a happy gal. ok enough blabber, on with the show.

can you guess which one off this wall i bought?

one of the firsts i tried on, did not buy.

oh the fun to be had in here dressing mannequins.

irene did some magic on it and made it tighter, i was too insecure to let her make it super tight but now wish i went for it so i might bring this baby back for a visit. also, if you’re in a hurry to have something ready they will fix it for you and deliver it to your house can you believe those little elves so nice! sass was overhauling a dress and at the last minute a zipper came off and they wanted to work on it more and then drop it off can’t believe it i’m still stunned, that generosity just doesn’t happen in the world i know.

LOVE this number, what it was before i even would have worn but now it is so famke jensen at the 2006 mtv awards show she presented with rebecca romain at i have not gotten that image of her gliding across the stage out of my borderline-obsessed mind since.

a place for your dude friend to hang if ness. (there ARE guy threads too fyi).

see right over there to the right.

the longer it took for sass to work on two dresses, the more shit i tried on. not complaining.

a nice little fashion guy sauntered on in to offer some voice of reason to some of my selections, he disagreed on one dress i was not feeling myself and i’m glad he did. he yessed everything else. if you try something on and it doesn’t immediately jump out at you that you look amazing then you shouldn’t buy it.

when you go “thrifting” (yes i know that term is way pretentious lame) be sure to wear leggings and a teeny tank so you don’t have to be chilly and naked if you plan on trying on a lot of stuff.

oh don’t you think i won’t be back soon. when YOU go be sure to grab one of their adorable pamphlets it has a schedule of all upcoming events. (feb 3 is valentines mittens! feb 5 is learn to crochet a valentines cupcake!)

back at sass’ the can i actually wear this out hits home.

yeah of fucking course i can just do it why not.

hahah then crazy comes to tea.

which way to the barbie dream house i got lost once i passed polly pocket way.

i kind of super dig this one and will do it right. with curls and a lamb. oh man wait til you see the others.

then dreamy 18 year old 5 feet 9 inches of beauty strolled on in no big deal you know. oh man can i talk about your eye patch sam? well i guess i just did but not the “best” part about it.